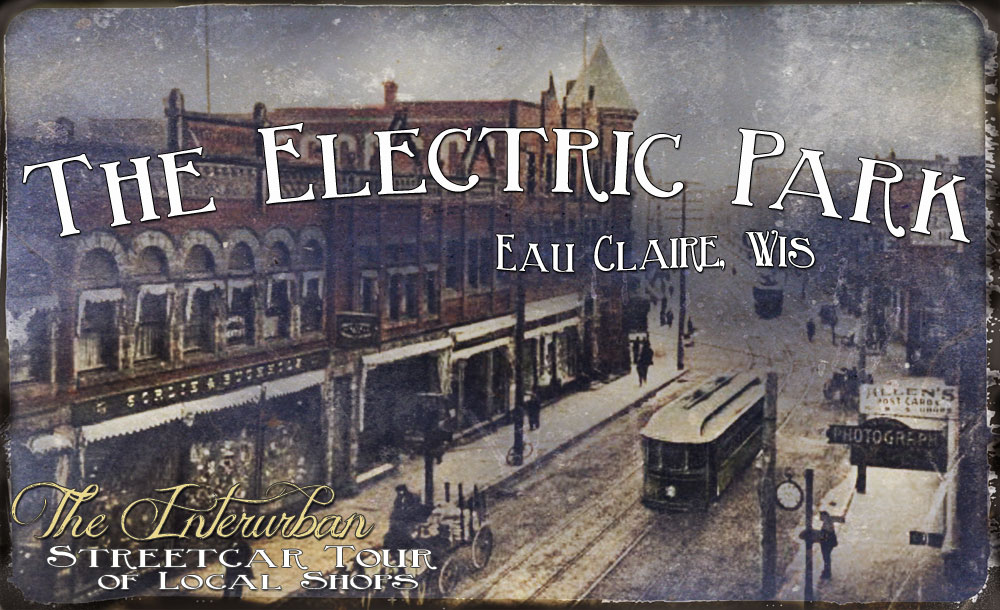 History of the Interurban Streetcar Line

Streetcars have been going down the streets of Eau Claire, Wisconsin since 1879. The horse-drawn streetcar line was converted to electric in 1889. The Electric Car Interurban Service operated under Chippewa Valley Electric Railway Co.  began in Eau Claire, WI, in 1889. Arthur Appleyard, a wealthy Boston financier  merged the Eau Claire Street Railway Company with the owners of the Chippewa Falls Water Works & Lighting Company. The line served the Downtown Eau Claire area, through Hallie,  into Chippewa Falls & and later Altoona. In fact many old-timers still refer to the Hallie area as “Electric Park.”

In our Electric  Car Interurban photo, you can see the rail cars running down what is Barstow Street. If you’re familiar with the area, you will even recognize the dome shape of what is now The Stones Throw. As you can see, the track ran down the center of the road, with opposing lanes of traffic going down either side.

Midway Park was created in 1895 by John Ure, Jr. Mr. Ure prepared 400 acres of land which united the Eau Claire & Chippewa areas. Residing in Lake Hallie, this location was a midway stop between Eau Claire & Chippewa. It was later renamed Electric Park in 1910 when Chippewa Valley Railway and Light & Power Company worked with Bob Lange to rename the park. Electric Park included a band shell, amusement park complete with rides, a canopied Railway Waiting Shelter, dance pavilion, and ball park. In its heyday, the park was known to have dances, moving pictures, and fishing. The Electric Park has lost much of its history and former glory, known only by the historical marker at the Waiting Shelter in Irvine Park. The true Electric Park was situated where the Eau Claire Press building is now sits.

The Interurban Tour of Local Shops

In a concentrated effort between local photographers, Bobbie Sue Baker & Travis Dewitz of Violet Photography & Design and Dewitz Photography; the two are working hand in hand to share some of the history of our area. Forming a project, aptly named “The Electric Park,” the two photographers will be visiting local Chippewa Valley small businesses, and providing a history of the small business along with information pertaining to the owner, what they offer, and any available contact information. The project will take Travis & Bobbie Sue from downtown Eau Claire, through Altoona and Lake Hallie, into downtown Chippewa Falls. Their hope, is that through their project, the people of the Chippewa Valley will be reunited with their rich and prosperous history and will be connected with the incredibly talented local businesses our area has to offer. Both photographers have a strong drive to support locally owned businesses, business owners, and artisans and are very excited to share their immense love for their beautiful city with you.